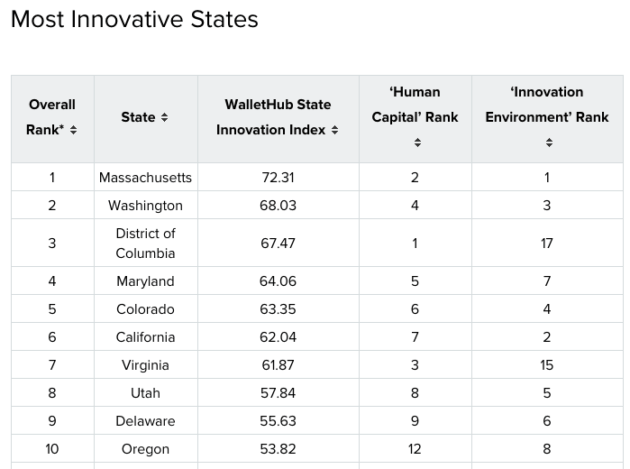 Washington state ranks second in the country when it comes to states contributing the most to the nation’s position of innovative strength during the tech era, according to a new study from WalletHub, the Washington, D.C.-based personal finance website.

The 2019 Most & Least Innovative States report compared the 50 states and the District of Columbia across 24 key metrics in two dimensions, “Human Capital” and “Innovation Environment.” Washington ranked second overall behind only Massachusetts.

Here is how the state ranked in other areas, with 1 being most innovative and 25 being average:

WalletHub assembled a panel of four experts and asked them a variety of questions aimed at helping struggling local economies become more like successful tech-centric cities. One of the questions assumed that Seattle-based Amazon might still be looking for a home for the 25,000 jobs it snatched back from New York City recently. “Which states / cities have the most chances to get other half of Amazon’s HQ2 now?” WalletHub asked.

Barry Goldman, associate professor in the Eller College of Management at the University of Arizona, didn’t offer any real insider perspective.

“Only Bezos knows!” Goldman said. “Recently, I know, more than 80 labor and civic leaders asked him to reconsider his decision to pull out of New York.”

Jason Stephens, an associate professor of Instruction in the Business and Entrepreneurship Department at Columbia College Chicago, ticked off a list of items that could have come from Amazon’s original request for proposals. He said cities that could attract the tech giant should have a mix of populations with diverse skill sets; affordable housing; reliable and affordable transportation systems; dynamic and forward-looking local governments.

To read the complete study and learn more about the methodology, visit WalletHub.

This was posted on GeekWire.