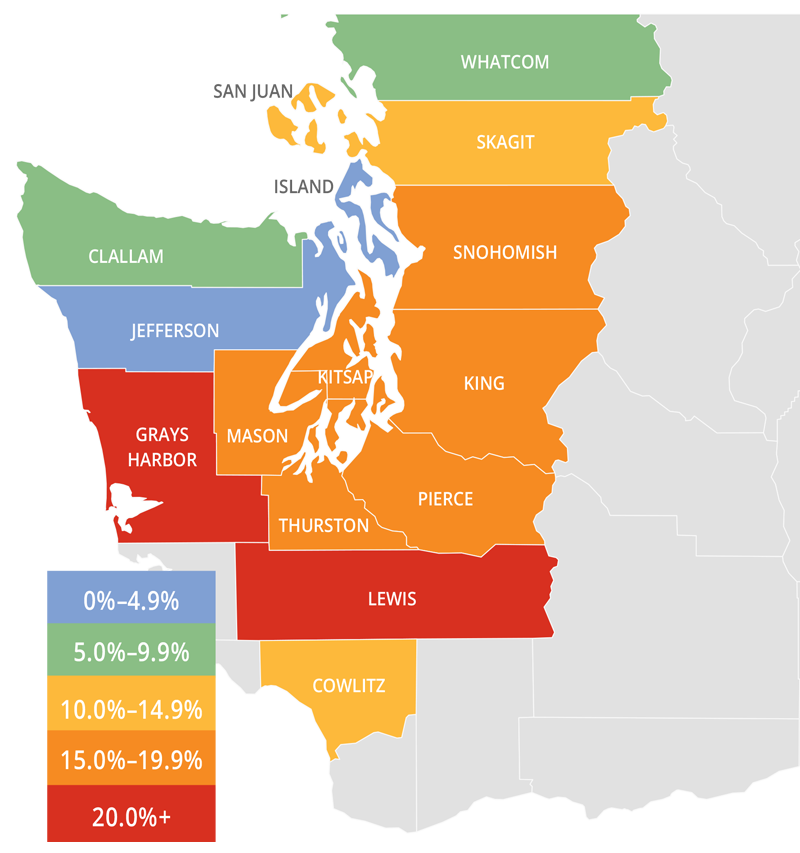 The following analysis of the Western Washington real estate market is provided by Windermere Real Estate Chief Economist Matthew Gardner. We hope that this information may assist you with making better-informed real estate decisions.

The Washington State economy added 96,900 new jobs over the past 12 months, representing an annual growth rate of 2.9%—still solidly above the national rate of 1.5%. Most of the employment gains were in the private sector, which rose by 3.4%. The public sector saw a more modest increase of 1.6%.

The strongest growth was in the Education & Health Services and Retail sectors, which added 17,300 and 16,700 jobs, respectively. The Construction sector added 10,900 new positions over the past 12 months.

Even with solid increases in jobs, the state unemployment rate held steady at 4.7%—a figure that has not moved since September of last year.

I expect the Washington State economy to continue adding jobs in 2018, but not at the same rate as last year given that we are nearing full employment. That said, we will still outperform the nation as a whole when it comes to job creation.

This speedometer reflects the state of the region’s housing market using housing inventory, price gains, home sales, interest rates, and larger economic factors. For the first quarter of 2018, I have left the needle at the same point as fourth quarter of last year. Price growth remains strong even as sales activity slowed. All things being equal, 2018 is setting itself up to be another very good year for sellers but, unfortunately, not for buyers who will still see stiff competition for the limited number of available homes for sale.

Matthew Gardner is the Chief Economist for Windermere Real Estate, specializing in residential market analysis, commercial/industrial market analysis, financial analysis, and land use and regional economics. He is the former Principal of Gardner Economics, and has more than 30 years of professional experience both in the U.S. and U.K.

This article originally appeared on the Windermere.com blog.

Related Articles
Blog Local Housing Market Update – October 2015 The statistics have been released for last month’s local housing market. Strong sales continue to whittle down a dwindling supply of homes. The lack of supply to meet demand kept driving home prices upward in September. While the Puget Sound area saw steady appreciation over a year ago, there are signs that that the frenzied level […]
Blog The Gardner Report: 4th Quarter 2022 The following analysis of the Western Washington real estate market is provided by Windermere Real Estate Chief Economist Matthew Gardner. We hope that this information may assist you with making better-informed real estate decisions. For further information about the housing market in your area, please don’t hesitate to contact your Windermere agent. REGIONAL ECONOMIC OVERVIEW […]
Blog Happening on the Eastside: February 2023 February is close on our heels, temperatures are still chilly, and the sun is finally waiting until after five to set. If you have some of the post-holiday blues fear not, February has plenty of reasons to celebrate including Valentine’s Day! Each month we put together a comprehensive calendar of special events happening across the […]