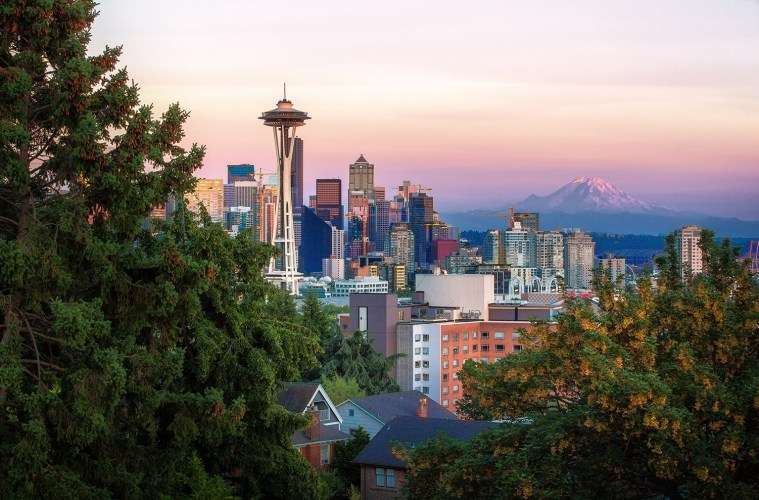 SEATTLE – A top national news site has ranked Washington as the best state in America.

The ranking, announced Tuesday by U.S. News & World Report, says the home of Amazon, Microsoft, Starbucks and Boeing earned the No. 1 ranking based on several criteria, including health care, education, economy and opportunity.

“This confirms what we in Washington have always known – that our state is great for businesses, workers, and investments, coupled with natural beauty and innovative, creative people,” Gov. Jay Inslee said in a statement.

Meanwhile, a health lifestyle site has ranked Seattle as America’s second-fittest city. That ranking, by the American College of Sports Medicine and the Anthem Foundation, is based on the Emerald City’s high marks on 33 different measures of personal health habits and how well that works to encourage fitness in the overall community.

The two high rankings together echo much of what local residents already know – that Washington is a good place to live and work.

A review of U.S. News’ ranking of Washington as the nation’s best state sums it up this way:

That Washington state boasts a booming economy is hardly a shock. The state is home to Amazon.com, after all, and a mature tech sector led by Microsoft. Washington apples, wheat, hops and grapes feed and inebriate the world. Boeing Co. aircraft circle it.

But Washington has a supercharger: power.

Cheap, climate-friendly electricity drives Washington’s economy, the nation’s fastest growing, according to the U.S. News’ Best States ranking of economic growth. The tech-heavy state’s expectedly strong broadband network sits atop one of the nation’s best electrical systems, one well-positioned as the country shifts away from coal- and natural gas-generated electricity. The state expects to be coal-free by 2025, while still charging rates among the nation’s lowest.

… The (tech) sector’s growth in and around Seattle has made the state a hub for invention while drawing droves of young, educated workers. Seattle-headquartered Amazon dominates e-commerce and cloud computing globally, while a resurgent Microsoft and rapidly expanding life-sciences sector that includes startup stars Adaptive Biotechnologies and Sana Biotechnologies are generating new technologies at a rapid clip.

Older corporate powerhouses founded or headquartered in the Seattle area – Starbucks, Costco, T-Mobile and Boeing – have been eclipsed by Amazon, whose recent growth remade Seattle’s downtown core and recast its skyline. Washington’s gross domestic product growth rate – 5.7 percent in 2018, the highest in the nation – is largely thanks to that tech expansion, which has driven up real estate values.

… It follows, then, that the state ranks highly – third in the nation – for economy in U.S. News’ latest Best States rankings. It also places No. 2 for infrastructure, No. 4 for health care and No. 4 for education. Washington’s showing in these categories also helps it achieve the overall No. 1 ranking among states this year.

Despite its top ranking, Washington does have some weak points, according the U.S. News study.

That state’s transportation system is “middling,” and average commute times are among the longest in the nation, the study found.

“Necessities, particularly housing, are beyond the means of many workers in booming areas of the state. An acute lack of affordable housing has been accompanied by yearslong waits for subsidized rentals in the Seattle area, where roadside greenbelts and sidewalks are packed with tents and shanties,” says a review of the study.

But those shortcomings are outweighed by the Washington’s strong points, which promise to continue far into the future, the study found:

The state is also poised to lead in the development of electric grid modernization technologies. Intelligent, efficient electric grids allow intermittent energy generators like windmills to flourish. Two eastern Washington-based firms, Itron and Schweitzer Engineering Labs, are leaders in the field. Inventors elsewhere in the state hope to refine low-carbon biofuels that can power aircraft.

Earlier this month, Washington lawmakers passed a suite of clean energy measures that put the state on a path to a fossil fuel-free electrical system by 2045. New programs shepherded through the state legislature by Inslee would also dramatically expand access to electric vehicles, support and eventually mandate energy efficiency in large buildings, and ban “super-pollutants” that can do thousands of times more damage to the environment than carbon dioxide.

You can read the full U.S. News report here >>

Related Articles
Blog What Do Past Years Tell Us About Today’s Real Estate Market? As you follow the news, you’re likely seeing headlines discussing what’s going on in today’s housing market. Chances are high that some of the more recent storylines you’ve come across mention terms like cooling or slowing when talking about where the market is headed. But what do these terms mean? The housing market today is anything but normal, and it’s still […]
Blog Local Market Update – October 2021 Despite a boost in new listings, inventory remained as tight as ever in September. The shortage of homes for sale combined with pent-up buyer demand and low interest rates kept prices high as compared to the same time last year. However, home prices over the past few months appear to be leveling out. The market […]
Blog 4 Tips To Prep for Your Home Sale This Fall Even in a hot sellers’ market like today’s in which homes are selling so quickly, it’s still important to make a good first impression on potential buyers. Taking the time upfront to prep your house appropriately can bring in the greatest return on your investment. Here are four simple tips to make sure you maximize the sale […]